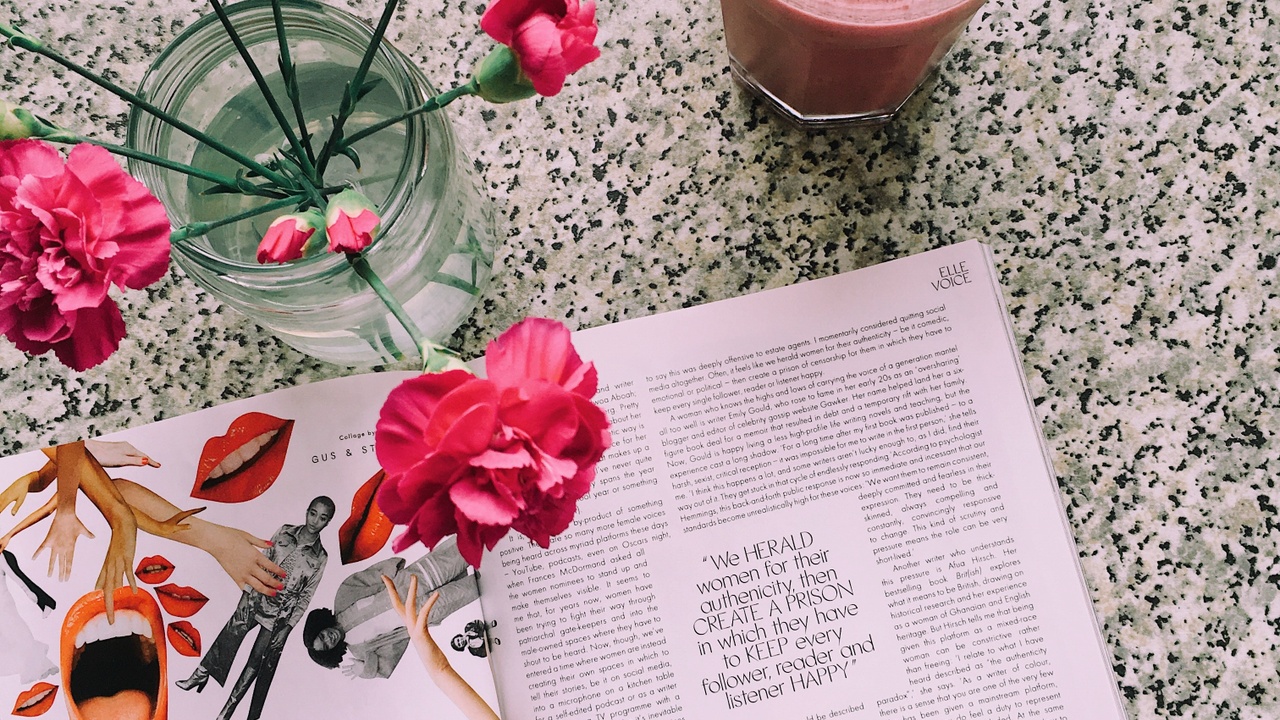 As a young middle class white teen living in suburbia, I lived for fashion magazines. I started with Seventeen Magazine in the mid 80s. Remember the Molly Ringwald prom issue filled with Jessica McClintock dresses and Swatch ads? I then graduated quickly to Mademoiselle and Glamour. I also read Vogue, Elle, Harper's Bazaar, and Town & Country, but those seemed a little aspirations whereas the other magazines offered a life I could see living. As an only child with no extended family, these magazines acted as an older sister or wise aunt and I took them as gospel.

Recently, I went back through some magazine clippings I've had on hand since then. And, wow, how did any of us ever get through that time? AS Gen X women, we were wedged between second and third wave feminism. We were too young to be bra burners and the riot grrrls had not yet made an appearance. Reagan was president, rom coms were at their apex, Alex P Keaton was positioned as charming. A lot of weird messaging came out of that time that a lot of midlife coaching clients are still fighting.

How Do You Stack Up: Intimate Facts on Women from Sex to Salaries (Glamour July 1984)

Want to Be More Loveable? Take Our Test to Learn How (Mademoiselle May 1980)

Be Part of a New Glamour Survey: How Does Work Affect Your Sexual Self (November 1985)

Will Motherhood Make You a Lousy Lover? (May 1982 Glamour)

Will You Get Fat? How to Beat Your Odds (Glamour September 1988)

Stop Blaming Men for Everything: A Guy Begs for Mercy (Mademoiselle August 1989)

What's He Really Thinking? How to Be a Better Man Reader (Glamour September 1988)

Are You Wearing the Right Clothes for Your Job? (Glamour February 1988)

One Good Man! When, Where and How to Find Him (Glamour

Loving an Unfaithful Man: When to Split, When to Stay (May 1987 Glamour)

Do You Have What It Takes to Be the Boss? (Glamour October 1980)

Breasts That Measure Up: How to Make Your Top Tops (July 1984 Glamour)

Could or Should Your Love Survive an Affair (Glamour September 1980)

How to Handle Your Absolutely Impossible Boss (Glamour September 1980)

Can Lovers Cheat and Still Be Faithful? (June 1990 Glamour)

The Office Party: How to Impress Them All (Glamour December 1980)

Is There Life After Work? (April 1980 Mademoiselle)

Risque Business: How Sexy is Too Sexy at Work? (June 1992 Mademoiselle)

Sex and Tension at the Office (Mademoiselle September 1980)

Violent Crime: How to Save Your Own Life (January 1982 Glamour Magazine)

They're Not All Married of Gay: The Man Shortage Myth  (September1986 Mademoiselle)

Sexual Skills: Can You Be Too Good in Bed? (November 1984 Glamour)

Why Lovers and Petty, Mean, Bitchy and Snide When They Really Mean I Love You (Glamour February 1980)

How to Stop Messing Up Your Love Life (January 1983 Glamour)

Get Your Good Looks Back: 20 Pretty Up Ideas for Ugly Days (Mademoiselle November 1986) had:

There were a few steady themes:

After the Baby: Shedding 25 Inches and 25 Pounds

Would your Post Nude for Playboy? 3 Women Tell Why They Did

12 Things No Man Will Give Up for a Woman

That's quite the wild narrative arc. It's all a lot to take in.

As white Gen X women, we also lived in the media shadow of the wage gap, sexual harassment, AIDS, serial killers, and the expectation that women marry, women over 40 being more likely to be killed by terrorists than marry (later proven wildly untrue). (Women of color and non-binary folks faced all of this and more.)

What we lacked information on was the power of female friendship, the beauty of collaboration, how beauty standard need to fit us and not the other way around, how the world is abundant and how to tap into that abundance, the power of creativity, accessing matriarchal energy and more (For that, there was Sassy and Jane magazines and independent zines, but they weren't around until slightly later.)

These mainstream fashion magazines weren't designed for our benefit even though they wer markting as exactly that. They were designed to make to make us scared so we'd buy stuff. While they had a feminist appearance with lots of women's names on the masthead, they were still part of a corporate wheel that saw white, middle class women primarily as a desirable marketing demographic. (The March 1980 issue of Glamour literally offers "16 Questions and Answers That Will Help You Be a Better Beauty Consumer.)

Now that we are in midlife, all of those messages about needing to be skinny, coupled up, and a boss bitch may float to the surface. So if you are a 45+ year old women, it can feel intimidating to be in the world particularly if you feel untethered after the kids have left home or a divorce or a job loss. I can see why so many of my married counterparts stay in partnerships even though their spouse is clearly eroding their self confidence (and why I chose to marry for a second time in midlife even though it was not a good fit.) I can also see why so many women lack genuine friendships since we were fed this message that the world was based in lack and we have to compete for the limited jobs and men and opportunities for our children.

Fingers crossed, the world is slowly starting to shift beyond patriarchy (it's interesting to see in a Psychology Today article that younger heterosexual women are refusing to date men who lack relationship skills) Still, patriarchy is where a lot of we midlife women live as we return to work and the dating world and start businesses. I know women who won't put themselves out there in terms of career because they are not happy with their weight. Others shy away from entrepreneurial success, fearful of rocking the boat with a husband whose career has stalled. Many women buy into that belief that work means hustling and don't feel they have the energy or girlboss stamina to contribute. In the coaching space, a lot of women view each other as competition even though it's such an individual practice that literally nobody else can do what you do.

I participated in what I call Mommy Goes back to Work at a university and was surprised at how much of the messaging focused on setting lower expectations around salary and title, embracing hustle culture, and updating our appearance (I was told to cut my hair and wear power suits like Sigourney Weaver might have suggested in Working Girl by an HR coach who my age.) This was a program run by women, but funded by companies with an agenda to find a relatively cheap source of labour. Always follow the money.

I've been quite surprised that women in my community seem quit convinced that I wish to run off with their husbands. To be clear, none of these husbands are former F1 drivers or male models. These were the same women lusting after Steve from Blue's Clues back in the day and I mean no disrespect but that should paint you a clear picture of what they have at home. Plus, many these husbands are bitter that they ended up in minivan land instead of being a playboy living in Monaco (men have their own 1980s patriarchal toxicity to overcome) and I can't imagine they'd become more charming when they are paying spousal support with an ever waning paycheck. I worked with these guys once upon a time and I see how they treat their wives then and now. An unhealed, former me might have been game, but now? I have my beautiful kids and lots of money so I can have all the time in the world to meet someone amazing and single (and preferably in Europe). But that sense of competition for scarce resources among women runs deep. All of those articles about cheating sunk in. So I can see why they feel the way they feel.

How do we address this wounding that we've experienced for so long we rarely question it?

There are a few excellent books: Patriarchy Stress Disorder by Dr. Valerie Rein and Discovering the Inner Mother by Bethany Webster are good places to start.

Find a community of like-minded women.

Over the pandemic, I reached out online to find community and found groups of entrepreneurial women rewriting the stories of women's success. Many are younger and less encumbered by some of the Gen X stories. And those Gen X women I meet are ones that have shed the mask of perfection we thought we needed to wear for a lifetime. Find a group that is honest about their own doubts and fears and views each other as collaborators and supporters rather than competitors. I've gone from being careful around other women to being open and vulnerable since I know they have my back when I'm not in the room.

Find a therapist or coach to help you face some of your midlife fears.

I'm willing to bet that the thing holding you back from your dreams has nothing to do with your thigh size. If you want to get fillers or lipo or something lifted, I say go for it, but know that it won't change your life.

I promise you, it's a game changer.

Create or manifest something.

The antidote to consumption (which is what these magazines pushed) is creativity. When you become a creative being, your gain a sense of confidence and self esteem that is hard to shake. Because it comes from within, it cannot be taken away. And making something out of nothing will convince you of the world's abundant nature.

As Gen X women, we were fed a steady diet of what was wrong with us. By focusing on what is right in our world, it helps us to reset old patterns.

I often use fashion or magazine imagery in my business because in spite of my early experiences. I've always adored the fashion world and the idea of editing our lives. I believe that we have the power to rewrite old stories and by using the idea of a magazine as a tool of empowerment, I've been able to rewrite a lot of the patterns established when I was a teen. I now believe that good men are a dime a dozen (and dating app stats seem to support this.) I believe that there is more than enough work for everyone. I believe that anyone can find success, not just the boss bitches (although they can too.) A rewrite is a powerful tool.

It's truly a wonder that any of us made it out of the 1980s OK. If you ar a midlife woman feeling a little lost, I can promise you, you are not alone.

If you are interested in editing your life in a non-toxic way, you can grab my free workbook at themidlifeedit.com.